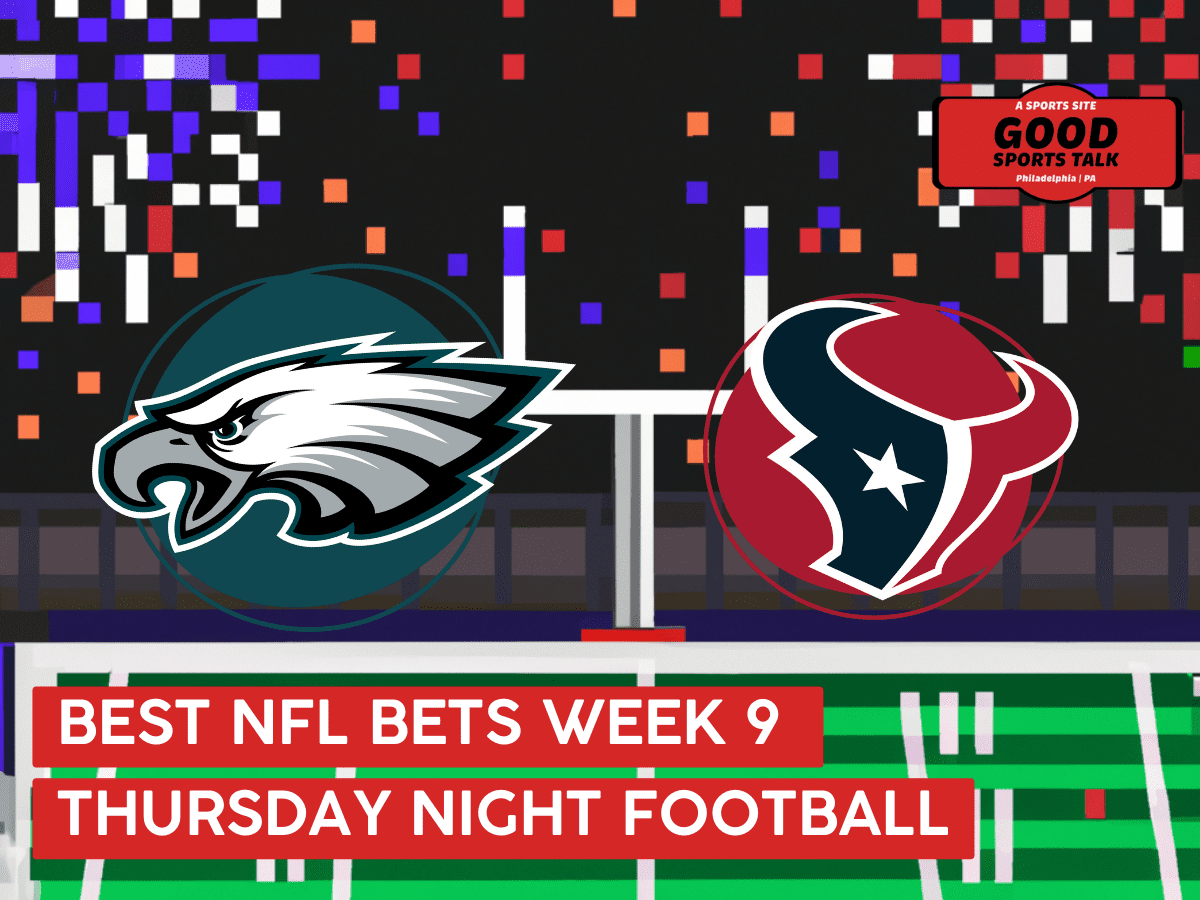 It’s time for Week 9 Thursday Night Football, tonight we have a great game between two cities who are also currently battling it out in The World Series!

The Philadelphia Eagles will face off against the Houston Texans at NRG Stadium this week. The Eagles are favorites on the road, The Texans are getting 14.0 points from Vegas.

Davis Mills will lead The Texans on the offense. This season Mills has averaged over 20 pass completions and almost 215 yards per game. The Eagles have done a great job of containing opponent passing yards and have only allowed about 200 yards per game.

The Texans will have Brandin Cooks, Brevin Jordan, and Phillip Dorsett II handling the receiving.

This season, Brandin Cooks has averaged almost 8 targets per game, his usage should be higher this week and should be able to connect much more, he has 350 receiving yards this season.

Tonight, Brandin Cooks is not expected to play tonight.

Brevin Jordan and Phillip Dorsett II are both usually less involved in the offense, but The Texans will be playing without Nico Collins (and now, no Brandin Cooks), so they are likely to get more involved tonight.

Dameon Pierce will carry the majority of the run game for The Texans. This season Pierce has averaged almost 1.0 yard per carry, but he has almost 540 rush yards this season. While his average per carry is low, it’s primarily because he has so many attempts, nearly 25 attempts per game.

In addition to running the ball, Dameon Pierce will also be involved in the passing game. This season Pierce has seen nearly 3.5 targets per game and should see a similar number of looks this week.

Jalen Hurts will lead The Eagles on the offense. This season Hurts has averaged 20 pass completions and nearly 260 yards per game. This week Hurts should be able to exceed his average passing performance.

The Eagles are the only team still undefeated in the 2022 NFL season. This team is amazing and currently remains undefeated with a record of 7-0.

The Eagles will have A.J. Brown, DeVonta Smith, and Dallas Goedert handling the receiving. Jalen Brown has tons of receiving weapons to rely on this year.

A.J. Brown has averaged nearly 6 receptions per game and should see a similar amount of usage in this matchup. Brown has been on of Jalen Hurts’ favorite targets this season with over 560 receiving yards.

I expect this to be a good matchup for Brown and should hopefully find more than one big play. He has 5 touchdowns this season, tonight he could easily add to that.

This season, Dallas Goedert has seen nearly 6 targets per game, ideally he’ll get about the same number of looks this week. He is averaging about 60 receiving yards per game this season.

Miles Sanders will carry the majority of the run game for The Eagles. Sanders has 5 touchdowns this season and is averaging 80 yards per game. In this matchup I could see some of his usage reduced though, in the case that that The Eagles run away with the game and preserve some of their top guys.

In that case, Kenneth Gainwell and Boston Scott could see a lot more usage this week.

Primetime games this season have been absolute snoozers. This game I kind of expect to be no different. While The Eagles are playing lights out, they aren’t a super high scoring team, neither are The Texans.

This matchup I think will allow him to at least keep up with his average performance which would well exceed this line.

Kickoff will be at 8:15 PM EST for Thursday Night Football, Philadelphia Eagles vs. Houston Texans.

The game will also be broadcast on local stations in Houston and Philadelphia.