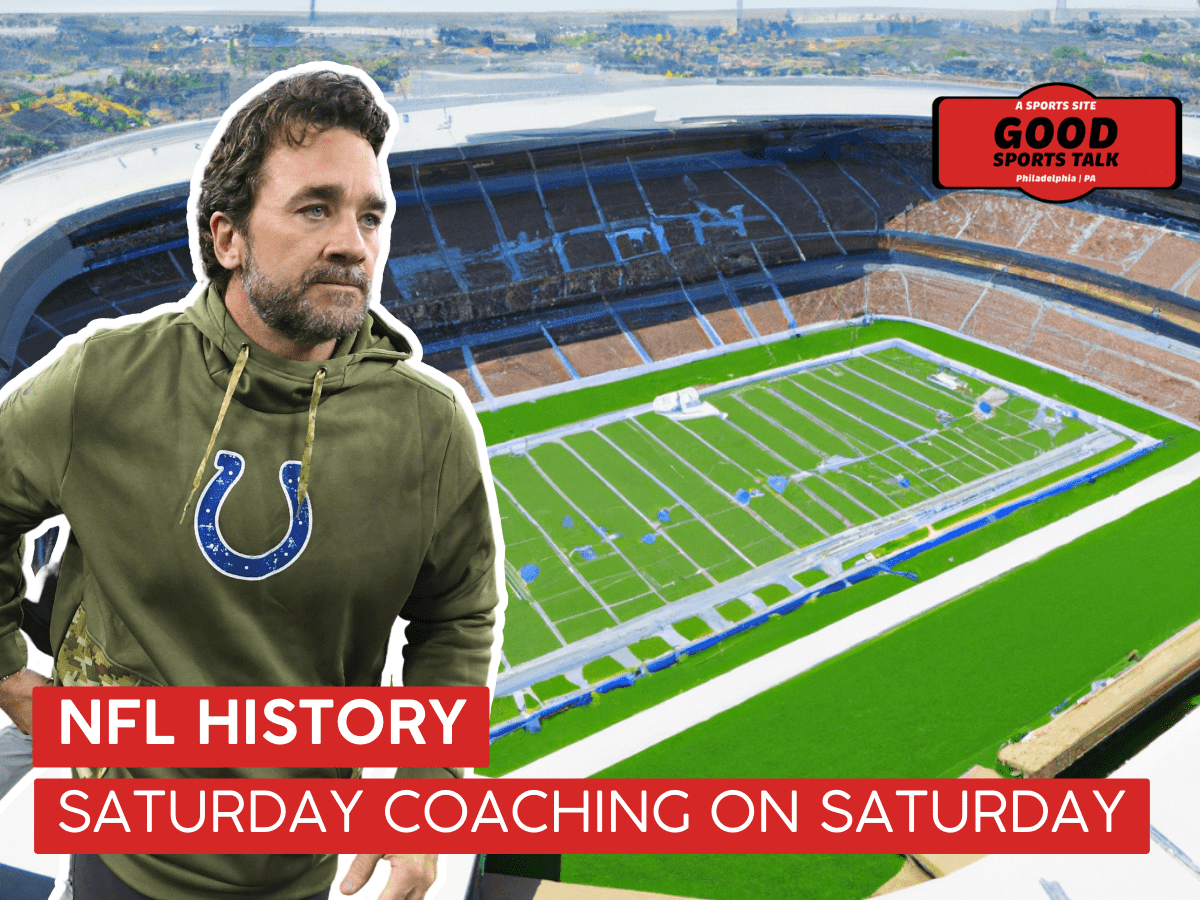 Tomorrow, Saturday, December 16, 2022, there will be a first NFL history. For the first time in NFL history, a head coach will coach a game on their namesake’s day of the week. That’s right, Jeff Saturday is coaching an NFL game on a Saturday!

That’s at least one record he doesn’t have to worry about Belichick ever taking.

Some other coaches are part of an elite club and coach on the day of the week that shares their name. For example, Coach Monday coaches wrestling at Morgan State, and Coach Friday coaches basketball at Penn State Harrisburg. They likely already have had games on their namesake days. In the NFL, though, football games are usually held on Sundays, Mondays, and Thursdays. However, this week is an exception.

No other NFL head coach has had a last name that matches the day of the week they play. There have been over 500 head coaches in NFL. Not a single Billy Monday. Or a Frank Sunday. Jeff Saturday stands alone.

Who is Jeff Saturday?

Six-time NFL pro-bowler. One of the top-ranked centers in the 1998 NFL draft. The Colts player turned the Colts head coach. First NFL head coach without prior professional coaching experience since Norm Van Brocklin. And that was decades ago.

While not a popular choice by a long shot, former Colts center Jeff Saturday was chosen to fill the interim head coaching role amid Reich’s exit.

Skeptics were quieted for a brief time as the Colts earned Saturday a win in his NFL coaching debut, beating the Raiders 25-20 in the week 10 matchup. What have they done since, though? Not much. Saturday has had his three-game losing streak now sitting at 1-3 in his very short professional coaching career.

The Indianapolis Colts and Minnesota Vikings will face off this weekend in what promises to be a crucial matchup for both teams. The Colts have had a tough season on the offensive side of the ball, but a bye week has given them a chance to rest and regroup. However, they will have their work cut out against the Vikings, who have been on a roll with Kirk Cousins having a standout season.

The Colts and Vikings are on the playoff bubble and will need a win in Week 15 to keep their hopes alive. The Colts will be hoping to take advantage of the Vikings’ porous defense, which has not been performing up to par this season. In their last game, the Vikings gave up 34 points to the Detroit Lions, despite a solid 425-yard performance by Cousins.

This game will be a test for both teams as they fight for a spot in the playoffs. The Vikings, who have a 10-3 record this season, will try to bounce back against the Colts at home. Can the Colts find the momentum they have been lacking all season, or will the Vikings continue their winning streak? Only time will tell in this crucial matchup.

How to Watch Today’s NFL Game

This week The Indianapolis Colts will make the trip up to Minnesota to take on The Vikings at U.S. Bank Stadium.