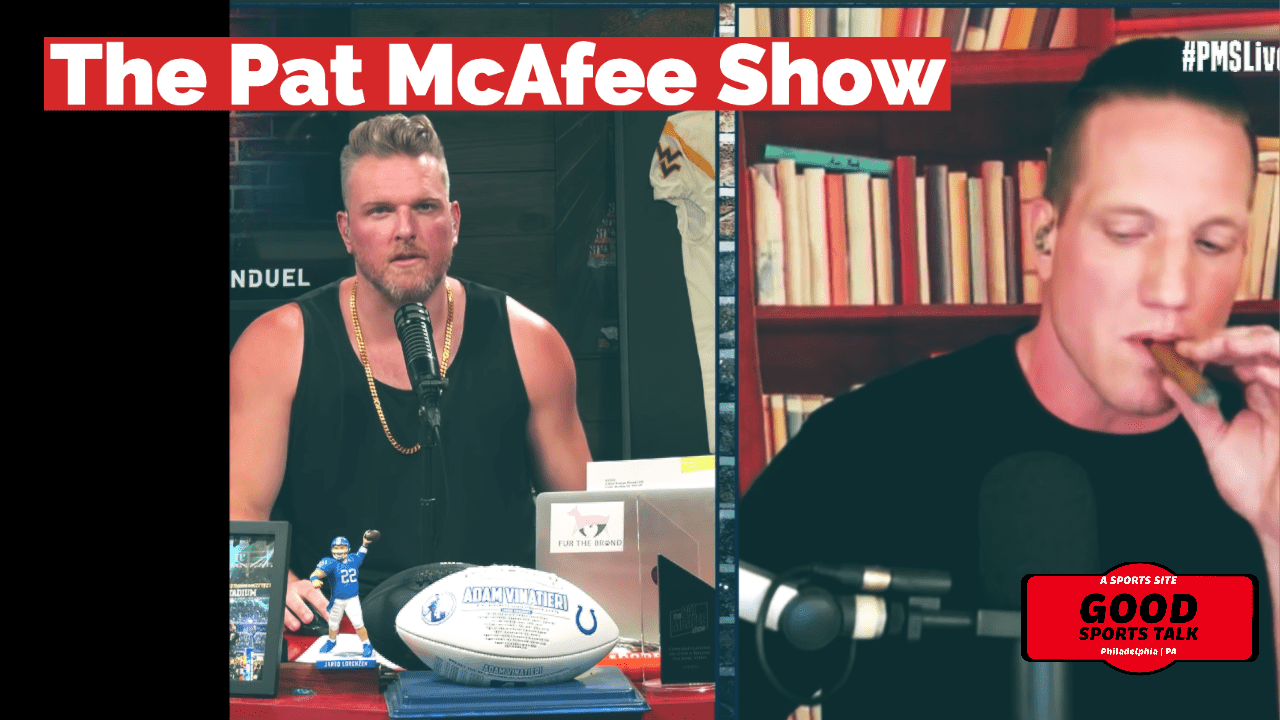 The Pat McAfee Show is an independent sports talk show owned and hosted by Pat McAfee. The show features a mix of sports, comedy, and pop culture.

Pat McAfee is a former NFL punter for the Indianapolis Colts who now hosts one of the most popular sports talk shows. He’s known for his candid and often humorous take on the world of sports.

Where is Pat McAfee From?

Pat McAfee grew up in Plum, Pennsylvania, a suburb of Pittsburgh. He attended Plum Senior High School, where he played soccer. His parents are Tim and Sally McAfee. His father was a truck driver when he was young, but he became a cabinet salesperson. Sally McAfee was a secretary.

Pat McAfee competed and won a youth Punt, Pass, and Kick competition when he was 15 years old after his mom, Sally McAfee, encouraged him to sign up. He won the competition and the prize was tickets to the Pittsburgh Steelers, his first NFL game.

After that, he earned him a trip to the Punt, Pass, and Kick Championship, which was held at the AFC Wildcard in Nashville, Tennesee. Coincidentally, The Titans played the Pittsburgh Steelers in that game.

Pat McAfee won the Punt, Pass, and Kick Championship by a landside and reveled in the boos of the Titans fans once it was announced that he was representing the Pittsburgh steelers.

Where did Pat McAfee play in college?

Pat McAfee played college football at West Virginia University as a punter. Although Pat grew up primarily playing soccer, he transitioned to football when he realized his future potential in the sport. During his senior year of high school, Pat has said more schools were interested in his football kicking ability than his soccer skills, even though he had little to no football experience.

When was Pat McAfee Drafted to the NFL?

McAfee was drafted in the seventh round of the 2009 NFL Draft by the Colts and went on to have a successful eight-year career in Indianapolis. He was selected to the Pro Bowl two times and was named First-team All-Pro in 2014.

When did the Pat McAfee Show start?

After retiring from the NFL in 2017, Pat McAfee left to pursue his media career full-time. Although he had already amassed a large following on social media, no network was interested in bringing him on full time.

Ultimately, Pat McAfee joined Barstool after Dave Portnoy, and Erika Nardini convinced him that he would be perfect for the company.

In 2018, after building up his brand more, Pat McAfee decided to leave Barstool and make the show independently owned. Pat went on an all-out media tour to build a more substantial fan base, joining shows like College Gameday, Pardon My Take, and many more.

Pat and the boys hosted the show during this time out of a renovated truck. They did this order to keep the show live every day while busy traveling across the country.

The show features guests from all different corners of the sports world. McAfee has had some of the biggest names in sports on his show, including Peyton Manning, Aaron Rodgers, Mark Walberg, and Phil Mickelson.

McAfee’s show has something for everyone, whether you’re a diehard sports fan or just looking for some interesting conversation.

What time is the Pat McAfee show?

The Pat McAfee Show is live Monday through Friday from 12:00–3:00 pm EST on YouTube and SiriusXM Channel 82.

On most days, the show goes later than 3:00 pm EST for about 20 minutes called Pat McAfee After Hours, where they take questions from callers and talk about other non-sports topics.

Where to watch The Pat McAfee Show

Full replays of the show are also available on the YouTube channel to rewatch anytime. There are also shorter compilation clips of individual interviews and segments from the show.

Where to listen to The Pat McAfee Show

What is The Pat McAfee Show Phone Number?

If you plan to call into the show, be prepared to wait! The show receives a ton of calls and is usually only able to accept a small fraction of them.

When is Aaron Rodgers on The Pat McAfee show?

Since the 2020 NFL season, Aaron Rodgers has appeared on the show every Tuesday, usually around 2:30 pm EST.

Aaron Rodgers Tuesdays have been a popular segment on the show because of his candidness and sense of humor. He often talks about things that he wouldn’t discuss on other shows or with the media. After discussing his passion for learning and reading, Pat McAfee and Aaron Rodgers started a recurring segment called the Aaron Rodger’s Book Club.

Ty Schmit is a co-host of The Pat McAfee Show. He often provides comic relief and is known for his impressions and sound effects. One of Ty Schmit’s most notable impressions is of Philadelphia Eagles Head Coach Nick Sirianni. He also serves as the show’s producer.

Ty Schmit attended the University of Iowa and joined The Pat McAfee Show in 2017.

Gump Cathcart, aka Bubba Gumpino, is a co-host of The Pat McAfee Show. Before joining the show, Gump worked as a ship painter in Canada and was a regular caller to the show.

In addition to being a regular on The Pat McAfee Show, Bubba Gumpino is also the co-host of the Hammer Dahn sports betting show.

Hawk often provides inside information and analysis on the NFL and College Football. His experience as a professional athlete gives him a unique perspective that fans enjoy. AJ Hawk attended The Ohio State University.

AJ Hawk joins the show from his attic in Columbus, Ohio, and is known for his library of books and cigars he smokes during the show.

Evan Fox is the show’s videographer and right-hand travel companion to Pat McAfee. He is known for his love of Jack and Cokes on private jets.

Nick Maraldo is the audio engineer for Pat McAfee. He is responsible for ensuring that the show sounds great and runs smoothly.

Phil Mains is the CFO of Pat McAfee Incorporated and a childhood friend of Pat McAfee. Although the show is based in Indianapolis, Indiana, Phil continues to live in the Pittsburgh area.

Pat will often reference CFO Phil during the show when announcing large giveaways.