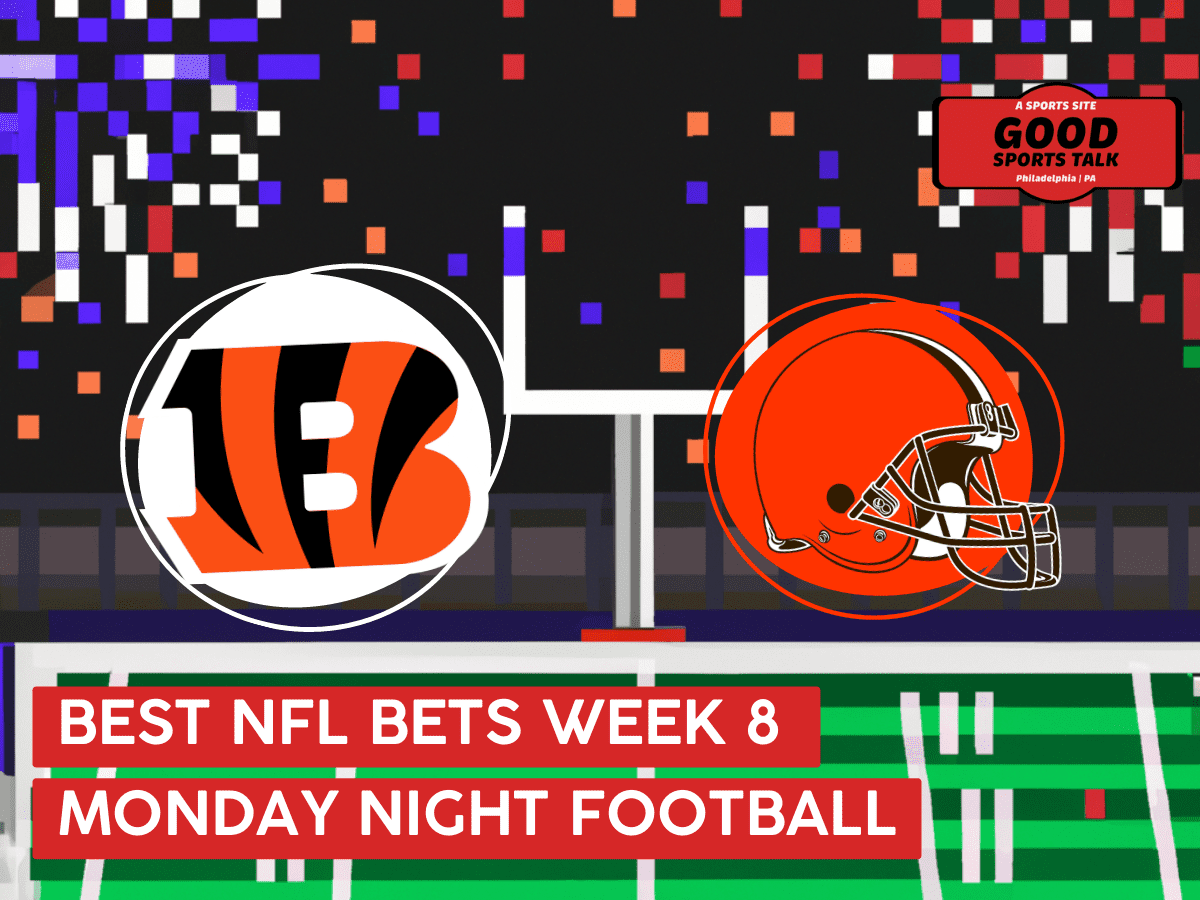 It’s time for Week 8 Monday Night Football, tonight we have a battle of Ohio!

The Cincinnati Bengals will face off against the Cleveland Browns at FirstEnergy Stadium this week. The Bengals are favorites on the road, The Browns are getting 3.5 points from Vegas.

Joe Burrow will lead The Bengals on the offense. This season Burrow has averaged 26 pass completions and almost 300 yards per game – he’s been a beast!

This week Burrow should be able to keep up with his usual passing pace, especially since The Browns have allowed 210 passing yards per game this season.

Burrow has a lot of weapons on the field to target.

The pass game for The Bengals will be handled by Tee Higgins, Tyler Boyd, and Hayden Hurst.

Joe Burrow has done a great job of targeting all his receivers and keeping defenses on their toes. It’s tough for even the best defenses to cover so much of the field.

They will be without Ja’Marr Chase this week however. He has been one of Joe Burrow’s top targets this season, but I think the rest of this receiving core should be able to pick up the slack.

Joe Mixon will carry the majority of the run game for The Bengals. In addition to running the ball, Joe Mixon will also be involved in the passing game. This season Mixon has seen nearly 5.5 targets per game and should see a similar number of looks this week.

One of the biggest challenges that this team faces is keeping Joe Burrow upright. He’s been sacked 24 times through seven games this year! Luckily he is fast on his feet, but ideally he’ll stop getting hit so much.

Jacoby Brissett will lead The Browns on the offense. This season Brissett has averaged 20 pass completions and nearly 225.0 yards per game.

Amari Cooper, Donovan Peoples-Jones, and Harrison Bryant will be responsible for receiving for The Browns. This season, Amari Cooper has seen nearly 8.0 targets per game, ideally he’ll get about the same number of looks this week. He’s scored five touchdowns this season.

Donovan Peoples-Jones has averaged almost 4.0 receptions per game and should see a similar amount of usage in this matchup. He’s been a great target for Jacoby Brissett, he has almost 340 receving yards this season, but still looking for a touchdown.

Harrison Bryant has 2.0 receptions per game but should see much more usage in this matchup. David Njoku will miss this game who he typically splits the TE role with.

Nick Chubb will carry the majority of the run game for The Browns. He has rushed for almost 750 yards this season and eight touchdowns!

The Bengals are 5-2 covering the spread this season. Not only that, they are simply the better team in this matchup.

Joe Burrow has ice in his veins and even without his favorite receiver, should be able to put up significant points against this defense.

If The Cleveland Browns want to stay competitive in this game, they’re going to have to throw the ball.

The bengals are going to want to contain Chubb as much as possible, so Brissett will need to rely on his receivers to make big plays.

If anyone is likely to benefit from that, it’s Amari Cooper. He has exceeded this line in four games this season already, including two 100+ yard games.

I wouldn’t bet too heavy into this, but it could be a fun bet to sprinkle in at around +500.

Samaje Perine is largely playing behind Joe Mixon. If this game gets out of hand with the Begals leading by a lot, a few things are likely to play out:

Kickoff will be at 8:15 PM EST for Monday Night Football, Cincinnati Bengals vs. Cleveland Browns.

The Cincinnati Bengals vs. Cleveland Browns game will be available on ESPN or streamed on ESPN+.

Is there a Manningcast with Peyton and Eli Manning Tonight?

Yes! Tonight Peyton and Eli Manning will be simulcasting the game on ESPN2. The show will, as always, feature their unique commentary on the game as well as have surprises guests during each of the four quarters.